Shrimp in tap water (Not Kosher) 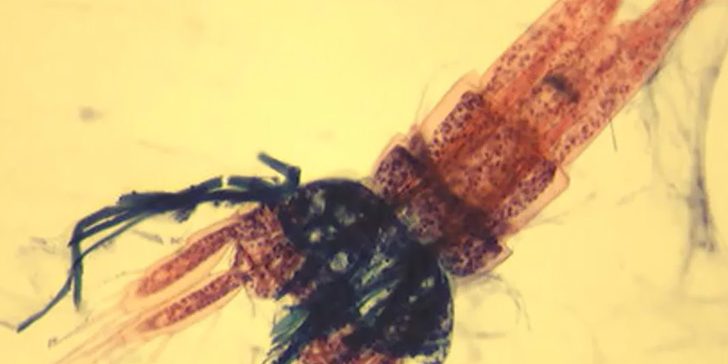 What's in Your Water?

Invisible shrimp could very well be living in every drop of water you drink -­ but that’s OK, they’re nothing to worry about.

A photo posted to the online sharing site Reddit has the Internet abuzz. It shows a tiny animal a shrimp like crustacean called a copepod and announces that the reader found it in his New York City tap water.

“You swallow these invisible shrimp with every gulp of NYC tap water,”trumpeted online blog Gizmodo about the discovery. Time magazine‘s website also announced the find breathlessly, exhorting New Yorkers to “drink up” -­‐ but noting that the critters may pose a problem for many of the city’s Jewish residents.

“Besides a serious ‘ick’ factor, the copepods are technically crustaceans, which means they aren’t kosher for the city’s large Orthodox, observant Jewish population,” the site warned.

It’s all true. There are, indeed, copepods in New York’s drinking water -­‐-­‐ and the reason they’re there is that the city’s water is superb for drinking. In fact, people across the country with excellent natural water supplies swallow invisible bugs like these every day.

Most copepods are so small -­‐-­‐ barely 1 to 2 millimeters long -­‐-­‐ that they’re more or less transparent. And they can be found in most freshwater habitats, including the reservoirs that supply public drinking water to cities like New York.

“It’s one of those interesting facts you learn about local drinking water -­‐-­‐ but it’s in no way dangerous,” Farrell Sklerov, a spokesman for the New York City Department of Environmental Protection (DEP), told FoxNews.com.

He explained that many cities filter their water, but if the water quality exceeds federal standards -­‐-­‐ which New York City tap water does -­‐-­‐ it doesn’t require filtering, a process that would remove the copepods. Among other cities that don’t filter their water are Boston, San Francisco, Seattle and Portland, Sklerov said.

He said the copepods “pose no risk to human health. It’s not something that’s regulated because there’s no harmful effects from them.”

A representative of NOAA’s Fisheries Services explained that copepods are a form of plankton, the minuscule creatures that form the majority of the biomass in the ocean and feed many animals, notably whales.

“There are areas that have blooms of copepods at certain times of year, such as Cape Cod bay in the spring,” said NOAA’s Teri Frady. “Right whales eat them, and that’s why you see right whales near Cape Cod at that time of year.”

They’re also harmless for humans, though if you’re disturbed, simply pass your water through an ordinary, over-­‐the-­‐counter filter.

Many people do have allergies to crustaceans, the large group of shellfish that includes lobsters, shrimp and copepods, raising the specter of allergic reactions to tapwater. That’s probably not a concern, said Clifford W. Bassett, medical director of Allergy and Asthma Care of NY and faculty, NYU School of Medicine and Assistant Clinical Professor of Medicine Long Island College Hospital..

“Shellfish allergy has risen to be one of the most common food allergens in the US, in adults. Although not studied formally to my knowledge, in general, there needs to be exposure to an allergen, and be significant enough to cause an immune response in an allergic individual, for symptoms to occur,” he told FoxNews.com.

In any event, I suspect the “dilutional” effects of drinking water most likely would reduce the risk,” Bassett said.

“Any individual who suspects they may have a food allergy should be seen by an allergist for proper evaluation and management of this condition,” he added.

And don’t worry. The bugs are kosher.

In a 2004 article in The Jewish Press, Rabbi David Berger, a professor of history at the City University Graduate Center, said, “The notion that God would have forbidden something that no one could know about for thousands of years, thus causing wholesale, unavoidable violation of the Torah, offends our deepest instincts about the character of both the Law and its Author.”

So drink up. The shrimp’s on the house.

Jeremy A. Kaplan is Science and Technology editor at FoxNews.com, where he heads up coverage of gadgets, the online world, space travel, nature, the environment, and more. Prior to joining Fox, he was executive editor of PC Magazine, co-­‐host of the Fastest Geek competition, and a founding editor of GoodCleanTech.